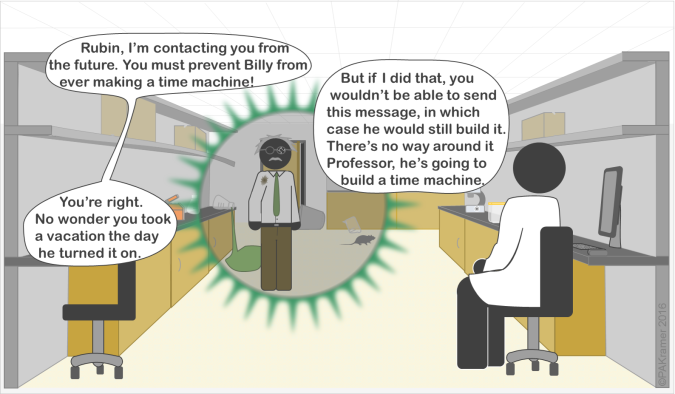 Let us draw an arrow arbitrarily. If as we follow the arrow we find more and more of the random element in the state of the world, then the arrow is pointing towards the future; if the random element decreases the arrow points towards the past. That is the only distinction known to physics. This follows at once if our fundamental contention is admitted that the introduction of randomness is the only thing which cannot be undone. I shall use the phrase ‘time’s arrow’ to express this one-way property of time which has no analogue in space.

-Arthur Eddington. The Nature of the Physical World (1928)

Time travel features heavily in speculative fiction. It provides a useful means of foreshadowing and helps to heighten suspense as the characters try to avert a looming disaster or manipulate the future for their own ends. It appeals to all of us who have ever experienced guilt or loss and want to go back and fix it. It is rife with unintended consequences and can trigger exciting conflicts. However, it also provides a great source of frustration for writer and reader alike as they try to contend with the plot holes, paradoxes, and skewed logic associated with tampering with the fundamental laws of our universe.

In this post, I will address the most common problems and paradoxes associated with time travel, and then discuss the science that could make it possible.

Cause and effect. That is how the universe works. Nowhere in nature can an effect cause itself, which is to say that energy cannot spontaneously manifests itself to perform an action. Thermodynamics and all of Newton’s laws require a cause and effect, but time travel inevitably breaks these laws.

Like the Billy and Rubin comic above, if the Professor succeeded in going back in time to stop Billy from building a time machine, he would then have no time machine with which to make the journey. Traveling to the past, for even a few seconds, can violate causality and initiates all kinds of paradoxes.

There is no better example of a causality violation than the Grandfather Paradox. If a time traveler kills his own grandfather before he meets his grandmother, the traveler will have never been born. Most disturbing of all, are the implications for “free will.” If the traveler sees his grandfather, he will be physically incapable of killing him, for doing so will prevent his own existence. Imagine a knife that physically cannot interact with a person, because if it were to interact, it would prevent its own interaction. *Mind blown*.

A term used in chaos theory, the Butterfly Effect is coined after the concept of a gentle disturbance in the air caused by a butterfly’s wings, which eventually leads to a hurricane.

Some writers insist that any disruption to the timeline will “heal,” and all will be set back on course, but this is unlikely. If the person went back just to witness an event, they talked to no one, and received no more than a passing glance by others and were quickly forgotten, then I could see the future not changing… much. But even if something small happens, like the traveler buys a slice of pie from a street vendor, it could initiate a chain of events that divert the future substantially. What about the person who was supposed to buy that slice? That person might then continue walking to find another vendor, and chat with friend he met on the street. If that friend subsequently misses a trolley and arrives late to work, failing to smile at the woman who would have been his future wife, then generations of people will have ceased to exist in the future, and all of their actions, and achievements, will have been erased… just because of a slice of pie. This is another example of causality, and every major and minor moment in our lives can be traced back to equally minuscule events.

Time travel isn’t the only thing that violates causality, it can also be violated with foresight. Having knowledge of a future event can allow the future to be changed, but is it really the future if it can be changed?

Prophecy is a common plot device in Fantasy novels. If a seer or prophet sees the hero’s future or reads their fortune, what will happen if that hero decides to do something completely different? If the hero changes the future, was it ever the future to begin with? What is to stop a person from just sitting down and not doing anything if they learn of their future? If that future depends on them performing an action, yet that person refuses to do anything, how can that future exist? This is the Idle (or Lazy) argument. For example, if a man learns he will die by being hit by a bus, that man can refuse to leave his house, thus preventing the future. I have seen authors stretch the limits of believability by having the hero walk into situations, saying and doing exactly what the prophecy says they will, even though they know exactly what fate awaits them.

This only works if the prophecy aligns with the main character’s own motivations, or if they are somehow duped into causing the situation they were hoping to avoid. We call these self-fulfilling prophecies, wherein the hero makes something happen because he or she believes there is no avoiding it, or because they want it to happen. For example, there is a prophecy that a castle will be invaded; so on the day of, the character leaves his guard post at the gates and flees the city. The enemy notices this new weak point in the castle’s defenses and decides to invade.

The science behind time travel:

Paradoxes aside, it should be noted that time is very strange. Some scientists suggest it is nothing more than a product of our minds trying to make sense of the universe. Time can go faster for some, and slower for others, all depending on how much gravity is around or how fast an object is travelling.

Time is inherently linked to the three dimensional fabric of space. Therefore, a force that can condense that fabric, can also affect time. Gravity is such a force, and a black hole is a near infinite supply of gravity. If it were possible to survive the spaghettification (gravity literally stretching you out) associated with entering a black hole, you would most certainly be crushed by the pressure of the mass surrounding you. There is a theory however, that a zone exists around a black hole where the centrifugal forces of its spin counteract the forces of its gravity. Thus, time would be slowed (possibly even reversed), but you would not be pulled into the center.

Satellites in orbit are actually experiencing time a little slower than we are, largely because of the speed at which they circumnavigate the globe. Einstein introduced the concept of special relativity, which basically states that, while nothing can travel faster than light, light will still appear to travel at light speed, even if the light source is traveling at close to light speed. So, depending on your reference frame, time will move differently based on your speed. This time dilation can make a person’s 300 year journey near light speed feel like 20 years. This is probably the closest humanity will come to “traveling though time,” but it is a one-way ticket. Traveling faster than the speed of light, theoretically, would reverse the flow of time. Most scientists maintain this is impossible, because it would violate causality.

Quantum mechanics and the Many-Worlds interpretation.

Some writers have gotten around the causality argument by suggesting that time might be like a river. If a significant event disrupts the flow of time, it can branch off into another stream, parallel to the first, creating two different timelines of different pasts and different futures.

Based on observations of quantum entanglement, and particle-wave duality, it is clear that, at the quantum state, an object can be in two places at once, and doing different things. Physicists have since theorized that any and every action creates a parallel universe, in which the opposite action was taken. These infinite worlds can be very similar to our own or very different. While this concept doesn’t quite offer up a solution to time travel, if proven true, it can help eliminate many of the causality paradoxes associated with it.

Because there are so many theories regarding time, its nature, and how to travel through it, there is no correct way to portray it in speculative fiction. I would advise, however, to thoroughly outline your book if it contains elements of time travel. For many readers, time travel paradoxes are indistinguishable from plot holes.

What other considerations should writers take when writing about time travel? Did I miss a theory? Leave your comments below.

Rest assured, if time travel is possible, I will travel back in time to this very moment to ensure that I got everything right…

…nope. No Phil from the future. I’m a little disappointed, actually.

3 thoughts on “The Science of Time Travel” 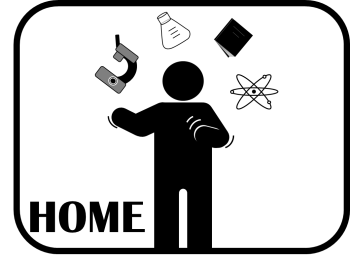 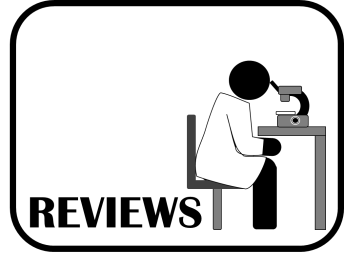 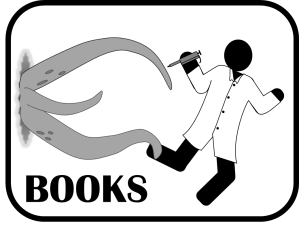 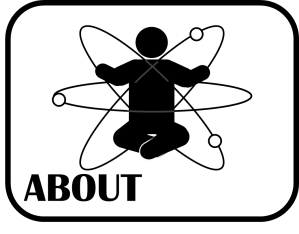 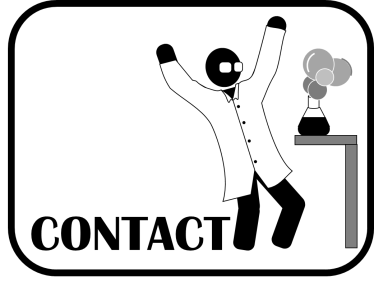